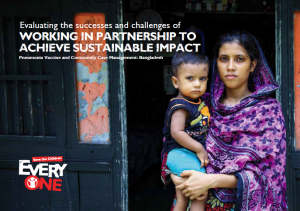 Bangladesh is one of the countries that met and exceeded its MDG4 target. Nonetheless, a high proportion of children under age 5 are dying from preventable and manageable conditions such as pneumonia, measles and diarrhoea. When the first World Pneumonia Day was announced in 2009, Save the Children set up a coalition with a range of civil society actors in Bangladesh to advocate for the provision of the pneumococcal vaccine. These included national professional bodies, microbiology researchers, large INGOs, national service delivery NGOs and government partners. These actors worked in unison to coordinate pneumonia advocacy work with the government and the Ministry of Health and Family Welfare. Their advocacy efforts also encompassed supporting a sustainable approach to case management (CCM) at the community level, which included training for front-line healthcare providers and informal providers. The approach produced favourable results after an extensive evaluation. Since then, coalition members worked directly with policymakers through national  committees and working groups advocating for the pneumonia vaccine and the CCM approach. It was announced in early 2015 that the pneumococcal vaccine would be integrated in routine EPI and that the CCM approach would be included into the next national child health strategy. As these two commitments were made, the coalition’s work was seen as successful through their strategies of working with the government and public mobilisation efforts.