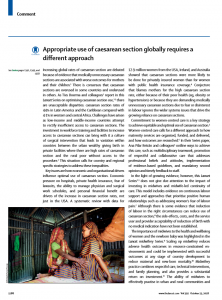 Key issues are how economic and organisational drivers influence optimal use of caesarean section. Economic pressure on hospitals, private health insurance, fear of lawsuits, the ability to manage physician and surgical work schedules, and personal financial benefit are drivers of the increase in caesarean section rates, not just in the USA. A systematic review with data for 12·9 million women from the USA, Ireland, and Australia showed that caesarean sections were more likely to be done for privately insured women than for women with public health insurance coverage. Conjecture that blames mothers for the high caesarean section rate, either because of their poor health (eg, obesity or hypertension) or because they are demanding medically unnecessary caesarean sections due to fear or disinterest in labour ignores the wider systems issues that drive the growing reliance on caesarean sections.