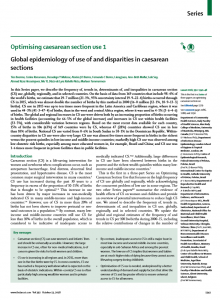 In this Series paper, we describe the frequency of, trends in, determinants of, and inequalities in caesarean section (CS) use, globally, regionally, and in selected countries. On the basis of data from 169 countries that include 98·4% of the world’s births, we estimate that 29·7 million (21·1%, 95% uncertainty interval 19·9–22·4) births occurred through CS in 2015, which was almost double the number of births by this method in 2000 (16·0 million [12·1%, 10·9–13·3] births). CS use in 2015 was up to ten times more frequent in the Latin America and Caribbean region, where it was used in 44·3% (41·3–47·4) of births, than in the west and central Africa region, where it was used in 4·1% (3·6–4·6) of births. The global and regional increases in CS use were driven both by an increasing proportion of births occurring in health facilities (accounting for 66·5% of the global increase) and increases in CS use within health facilities (33·5%), with considerable variation between regions. Based on the most recent data available for each country, 15% of births in 106 (63%) of 169 countries were by CS, whereas 47 (28%) countries showed CS use in less than 10% of births. National CS use varied from 0·6% in South Sudan to 58·1% in the Dominican Republic. Within-country disparities in CS use were also very large: CS use was almost five times more frequent in births in the richest versus the poorest quintiles in low-income and middle-income countries; markedly high CS use was observed among low obstetric risk births, especially among more educated women in, for example, Brazil and China; and CS use was 1·6 times more frequent in private facilities than in public facilities.