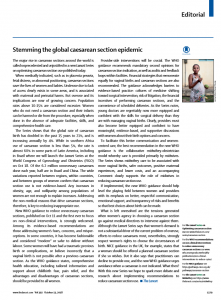 When medically indicated, such as in placenta preavia, fetal distress, or abnormal positioning, caesarean sections save the lives of women and babies. Underuse due to lack of access clearly exists in some areas, and is associated with maternal and perinatal harms. But overuse and its implications are now of growing concern. Population rates above 10–15% are considered excessive. Women who do not need a caesarean section and their infants can be harmed or die from the procedure, especially when done in the absence of adequate facilities, skills, and comprehensive health care.

The Series shows that the global rate of caesarean birth has doubled in the past 15 years to 21%, and is increasing annually by 4%. While in southern Africa use of caesarean section is less than 5%, the rate is almost 60% in some parts of Latin America, including in Brazil where we will launch the Lancet Series at the World Congress of Gynecology and Obstetrics (FIGO) on Oct 18. Of the 6·2 million unnecessary caesareans done each year, half are in Brazil and China. The wide variations reported between regions, within countries, and between groups of women confirm that caesarean section use is not evidence-based. Any increases in obesity, age, and nulliparity among populations of women are not enough to explain increases. Addressing the non-medical reasons that drive caesarean sections, therefore, is key to reducing inappropriate use.